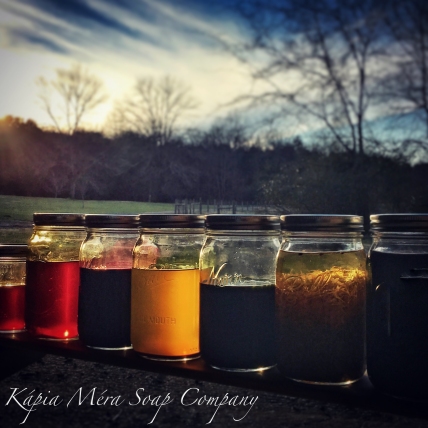 I decided to try out some new herbs, spices, and clays. It seems that with every swirl I want to try or every soap challenge I enter, I’m stuck using the same natural colors I’ve always used – indigo, charcoal, paprika, cocoa, walnut hull, and a variety of clays. But after so many orange and blue or black and white soaps, I’m beginning to get a bit bored. Lots of people already have great blogs and information on most of these, but it’s always a good idea to test and figure out how they work in your own soap. I ended up with some great new ideas and one soap with a cool looking alien spider swirl. :)

SOME NOTES and MY RECIPE
In the post below, I mention usage rates and infused oils. The usage rates are just what I tried for this test. They are not right for every soap recipe or every soap maker. I try to always add just enough and not overdo it (so the lather in my soaps is always white). You should test your own soap additives and never add more than what’s recommended as safe for the skin.

You’ll notice that my infused oils in this post are mostly done with olive oil. It’s simply what I had at the time. I use a grade A olive oil from Soaper’s Choice that doesn’t affect the color of the herb or spice. But normally when infusing oils, I prefer high oleic sunflower oil due to it’s very light color.

Because a recipe can definitely affect the color of the soap, I wanted to include this, as well. I used my slow-tracing swirl recipe (5% Superfat). This recipe can take longer to remove from the mold (depending on the environment and your water usage) and longer to cure; not to mention the infused oils that are added to each cup of soap. I do use a water discount, but most of my heavily natural colored swirl soaps need 6 weeks minimum to cure. But they still make great soap when they’re finally ready.

HERBS, SPICES, & CLAYS
Using herbs, spices, and clays can add wonderful properties to your cold process soap, while also giving the soap a unique color. Some of the herbs, spices, and clays in my test have been sitting in a box in my soap room for months, while others were just ordered in the past few weeks. The only thing I was unable to find was woad powder. It is and has been out of stock everywhere (for a reasonable price, that is). But since I’m so happy with indigo, I figured I could wait on the woad.  Here’s the list of herbs, spices, and clays you’ll see in my soap tests:

Each herb, spice, or clay was either dispersed in water/oil, infused in oil, or added straight to the soap at trace. I’ll describe that below and how much of each I used.

TESTING
When I started to prepare the recipe for these tests, I intended to just make a single soap with each herb, spice, or clay. But because I wanted the soap to gel and can never get my single guest soap tray to ever gel consistently (especially in Winter), I decided to just do 3 separate batches with swirls of colors in each batch. Granted, not knowing exactly how the colors would end up in the final soap was a gamble. And I did end up with one super ugly batch.

This was, hands down, the ugliest soap of the three. I think I really expected the Madder root to be more of a pink color (I’ll use less next time). And even though I made an infusion with the Madder root, I obviously didn’t strain it enough (speckled). I also ended up blending the Safflower soap WAY too long which wreaked havoc with my circling Taiwan swirl. But I did find a beautiful lime green (Nettle Leaf) and pale yellow (Safflower) that I will continue to use (the soap below is a better example of these two colors).

Here are the details and usage rates for this batch:

As I mentioned, my circling Taiwan swirl really didn’t swirl very well due to me over-blending the yellow. But I did end up with a cool alien spider swirl. You can also see the yellow and green a bit better here. 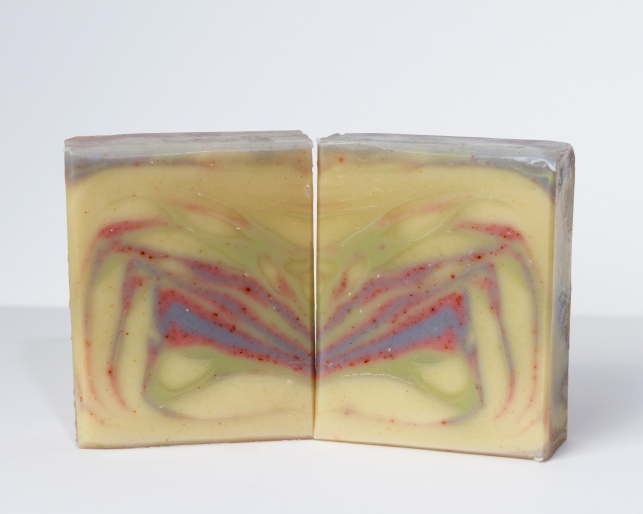 Of the three batches, this was my favorite because I discovered a red that I really like. And it wasn’t the Moroccan red clay (which is tan and, shockingly, turned out tan in the soap). Red Sandalwood powder made a really beautiful maroon red. I added a bit of activated charcoal to the indigo root to create a slightly darker blue.

Details and usage rates for this batch:

Okay, this soap is probably tied with the first one in the ugly department. I didn’t plan my color combinations very well. But, again, I got some good information out of the test. A pretty soap would have been nice, too. Oh well.

Details and usage rates for this batch:

I’ve had experience with all of the herbs and spices in this test, except for Spirulina. I really don’t like Spirulina. It must be added as a powder to get that dark green and it comes out speckled. I tried dispersing it in distilled water first and, man, did that stink. It does produce a pretty green color, but it doesn’t hold up well and will eventually turn brown. I also tried an infusion with it but ended up with a pea green color I didn’t like. My main takeaway from this soap test is a better usage rate for Alkanet Root. Out of a fear of ending up with a gray soap, I’ve always just used too much Alkanet infused oil to get a dark purple. In this test, I used a bit less and got a beautiful lavender color. As always, the Annatto seed imparted a lovely yellow color.