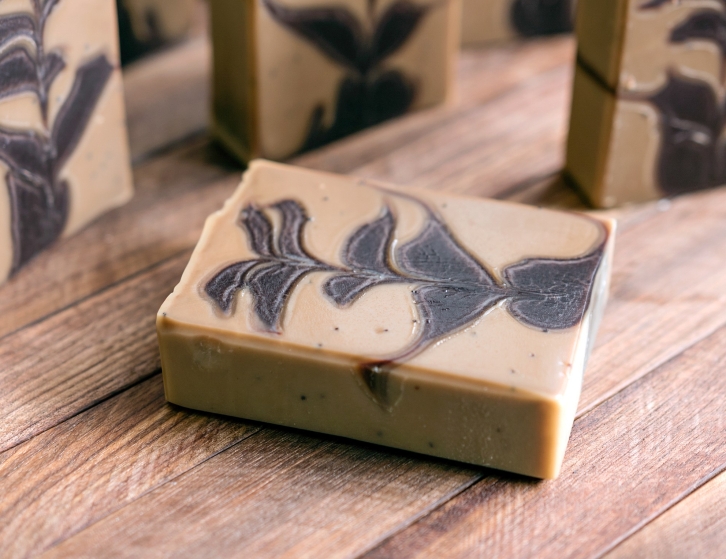 The February Soap Challenge Club involved creating intentional glycerin rivers in a batch of soap. Auntie Clara was our guest instructor this month. She’s written several posts explaining the science behind these rivers and has tackled several myths about them, as well. Auntie Clara also explains how you can create (or avoid) them in your own soaps. Besides describing the awesome science behind these rivers, Auntie Clara has created some of the most beautiful soaps with glycerin river swirls.

For the challenge, we had a choice of entering the regular category (glycerin rivers throughout the bar) or the advanced category (glycerin rivers in only part of the bar). Since I’ve had accidental glycerin rivers occur in parts of my soaps over the years, I thought I’d give the advanced category a try. I had no idea my previous accidental glycerin rivers would be so difficult to replicate. Let’s just say my overly confident attitude led to plenty of fails. If you’d like to see how I finally came up with a soap to enter and also see my fails, just keep reading. I filmed my process but haven’t yet had time to edit. I’ll hopefully be posting the video next week. :)

MY IDEAS & FAILS
The science behind glycerin rivers is very interesting. Auntie Clara’s post goes into all of the specifics and how it’s not actually glycerin (or glycerine, if you prefer). I’ve had the phenomenon occur in several of my regular soaps when I add a hydrated colorant like clay, coffee, or cocoa powder. Until I read Auntie Clara’s explanation of how water, temperature, and pigment can lead to rivers of clear soap, I had no idea the extra water I was adding to parts of my soap (along with the prolonged gel phase I was achieving by stacking and insulating a bunch of batches at once) was actually leading to the cracks of white or clear soap I was experiencing (along with an odd texture). In my coffee soap, I usually get rivers inside the cocoa powder swirl. While in my eucalyptus mint soap, I get halos of clear indented soap around the green clay. These aren’t the best pictures, but maybe you’ll be able to see. 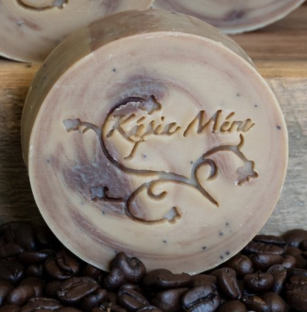 My first idea for this challenge was to use the feather swirl technique to create a green and pink clay flower (high water – glycerin rivers) surrounded by white soap (low water – no glycerin rivers). Instead of using the oven to keep the soap in gel longer, I put the batch between two other normal batches and covered them all with blankets. They were still hot the next morning, so they did go through gel and stayed warm enough all night. While this did work somewhat, the glycerin rivers just didn’t show up enough. You can barely see them in the clay soaps.

The recipe was 33% olive oil, 28% palm oil, 23% coconut oil, 11% apricot kernel oil, and 5% cocoa butter. I soaped at 90ºF with a 5% superfat. The low water white soap was a 44% lye solution, while the high water portion was a 28% lye solution. I simply mixed the entire batch to emulsion, divided the batch, then added extra water via hydrated clay to create the high water soap.

My second idea was to create a landscape soap. Even though this was a bad idea from the start due to the time it took, I did at least use the oven (preheated to 170ºF) to help my river chances. However, I turned the oven off immediately after putting the towel wrapped mold inside (probably should have waited the suggested 2 hours). I used the same recipe from the flower soap above. However, I divided the recipe into parts before blending and increased the water as needed. The high water portions of the soap were the lake and mountains (27% lye solution). The sky, sun, and riverbank were all low water (44% lye solution). I got some weird effects in the lake (colored with indigo root powder), but the green clay mountains pretty much did nothing but gel. The sky is simply a white and blue swirl.

My last and final idea was to go back to a basic coffee & cocoa peppermint soap that I’ve made in the past. I almost always get glycerin rivers in the cocoa parts. I decided to do a large cocoa feather swirl (high water) in the middle of a poppy seed coffee soap (low water). I made two attempts at this method (since I actually needed to restock my coffee soap anyway). Both soaps were made with a 35% lye solution to begin with (using triple strength coffee as my liquid). The water amount was increased in the cocoa portion of the soap by adding hydrated cocoa powder (ended up with about a 30% lye solution). One soap was left on the counter, under blankets, and between two other batches of re-stock soap I’d made (whew, I was tired that evening). The other coffee cocoa soap was wrapped in two towels and placed in a preheated 170ºF oven (that’s as low as my oven will go). I left the oven on 170ºF for 2 hours, at which point I turned it off and left the oven light on all night long. Both soaps were still warm in the morning. However, the oven soap was quite a bit warmer and took much longer to cool down.

Although the amount of cocoa powder I used in each of these soaps varied a bit, both soaps were poured the exact same way but turned out looking SO different. I think the first one was just at a slightly thinner trace and flowed outward more.

Here’s the coffee cocoa soap I left on the counter (this one also had more cocoa powder which created a darker brown color): 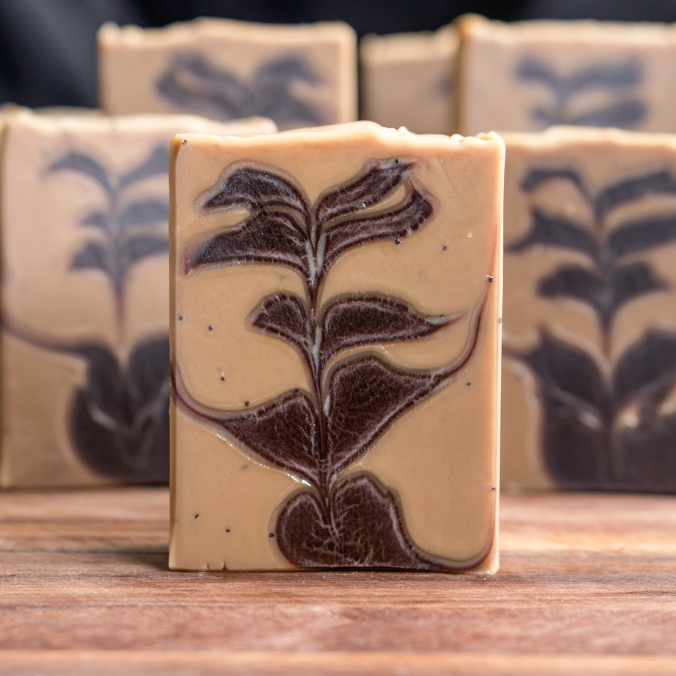 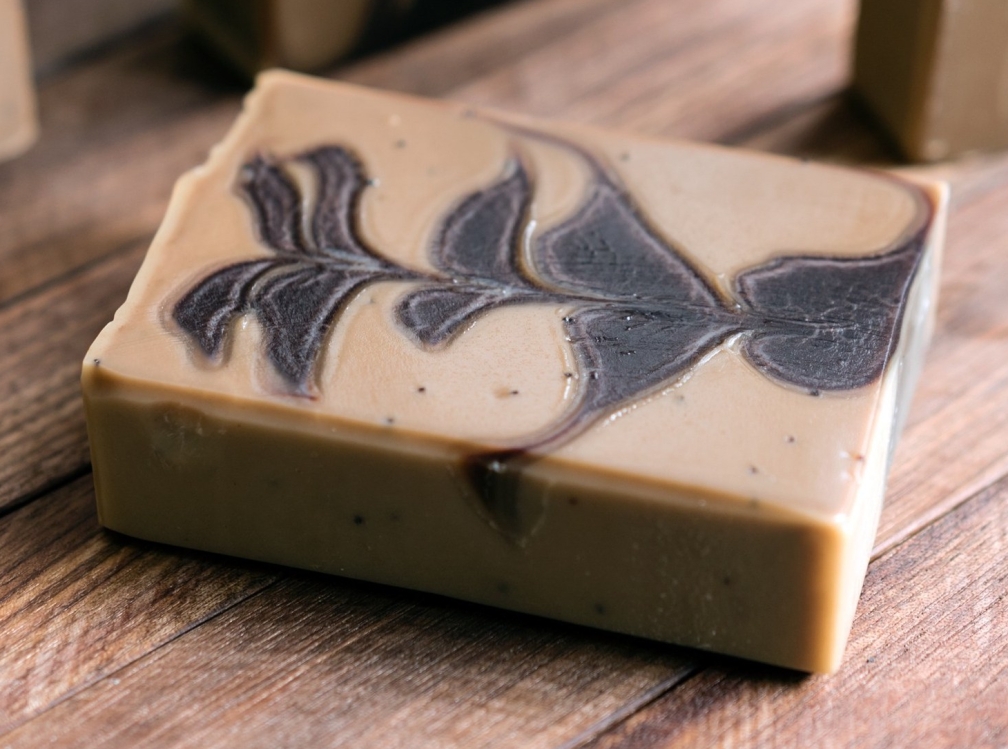 Finally, here’s the coffee cocoa soap I put in the oven (this one had less cocoa powder which created a lighter colored soap initially…the cocoa powder did darken after a few days).

While both soaps had glycerin rivers around and inside the swirl, the first one had more textured clear rivers outlining the flower and rivers along the stem. The oven soap had almost white halos, less texture, and crackling inside that made the leaves look like they had little flower veins. The outer plain coffee part of the oven soap was smooth but actually gelled just a little in the middle, which gave the cocoa swirl a bit of a 3D effect.

Here are a couple of photos taken 3 days later. The swirl soap darkened quite a bit and the white areas were more clear (surrounded by even more clear soap), but you can see the texture better.

MY ENTRY
While the oven soap with the white halos was my favorite, I really felt like the plain coffee portion of that soap gelled enough to create a mottled look (which could be considered to have glycerin rivers throughout the entire soap?). I just wasn’t sure, so I decided to enter the other coffee cocoa soap I showed first (I felt more confident this met the advanced criteria). So this is my entry for the advanced glycerin rivers challenge:

RECIPE & POUR
Since my video won’t be out for a bit, I wanted to show some pics of how I made the soap (as if this post isn’t long enough! LOL). I basically created the center swirl by doing a feather swirl.

For my darker colorant in the high water soap, I used cocoa powder mixed with distilled water.

I blended the entire batch to a thin trace, adding peppermint essential oil mixed with kaolin clay early in the blending process. 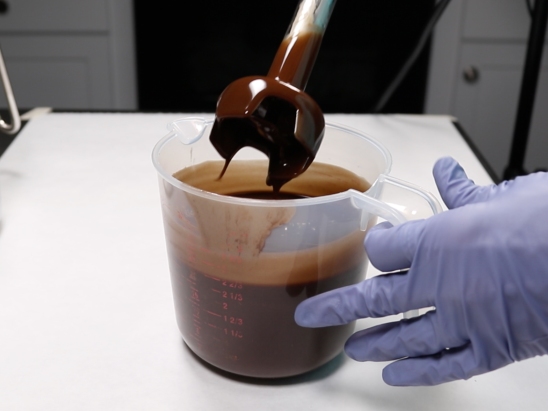 I then poured the soap, starting with a layer of the plain coffee soap, followed by lines of cocoa soap, alternating with more coffee and cocoa soap until I reached the top.

After the last layer of plain coffee soap, I made one pass with a hanger swirl tool (gear tie) – straight down the middle to the bottom, over to the side, then up and out. 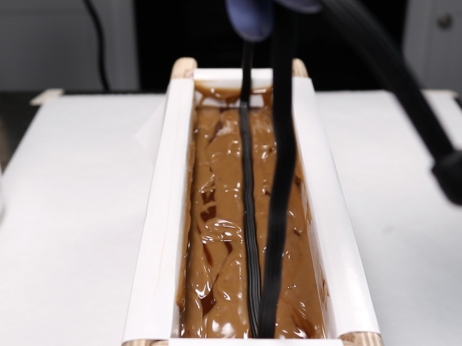 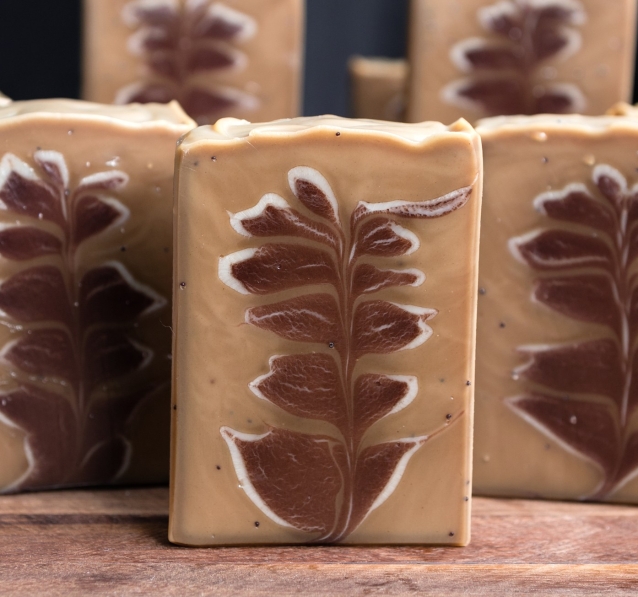